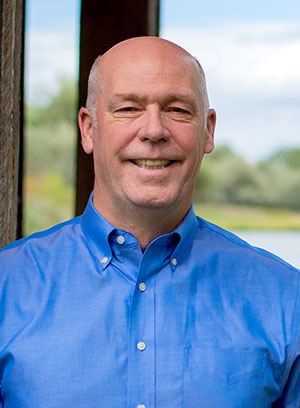 Montanans elected Greg Gianforte as their state’s 25th governor on November 3, 2020. Gianforte received more votes than any candidate for governor in Montana history and won with the largest margin for a first-term governor since 1920.

Gianforte campaigned on getting Montana’s economy going again, getting Montana safely open for business, and getting Montanans back to work in good-paying jobs. He also focused on changing the way Helena and state government do business to better serve Montanans.

After 34 years in the private sector, Gianforte has been Montana’s voice in the U.S. House of Representatives since June 2017. In Congress, Gianforte voted to cut taxes for every American taxpayer, roll back unnecessary, anti-jobs regulations, lower health care costs, and protect our Montana way of life, including our public lands.

Greg and Susan Gianforte founded RightNow Technologies two decades ago in their Bozeman home, and they grew it into the town’s largest commercial employer, creating over 500 high-paying Montana jobs.

Gianforte spent his entire career focusing on creating jobs and opportunities. He founded five different startup companies. He’s worked to improve Montana’s economy through the “Better Montana Jobs” project. He also launched scholarship programs to help low-income students and veterans pursue the education and training they need to start a career in Montana.

Montana’s next lieutenant governor, Kristen Juras grew up on her family’s ranch near Conrad. As an attorney in private practice in Great Falls, Kristen has helped farmers, ranchers, and small business owners navigate legal issues, and she has provided pro bono services to clients with disabilities who confront homelessness and addiction.

Kristen and her husband of 35 years, John, have three sons and two grandchildren.

From now until January 4th, Governor-elect Greg Gianforte and his team will be laying the groundwork for Montana's comeback.